I choose Peeta, as one of the Lad's I wanted to write about, for several reasons.

First of all, he's tough.  He's been through a lot of crap in his life.  He lives in District 12 to begin with.  Probably one of the toughest Districts to live in next to 11.  They live by their means, every single day.  A few are luckier than some in 12, but most just live with what they have.  Peeta had an abusive mother, but he did what he could to with stand her.  Luckily, his dad and brothers were kind to him.  And he's strong, physically, and mentally.  He may be kind-hearted, but that doesn't mean he's not strong.  He can lift sacks of flour.  And hell, he survived two Games, and a hijacking, and he had to have his leg replaced by a prosthetic.  The fact that he survived two Games and a hijacking says more about his mental strength than anything else.  I mean, I personally don't think I'd survive the Games.  I don't think I'd have the ability to get through it.

Second, he's kind.  When Katniss was starving, he gave her the burnt bread.  He looked after Katniss, more so during Catching Fire, than anything else.  He was there for her, holding her when she had a nightmare. He helped her put her life back together.  And Katniss helped him, too. (And I LOVE Katniss, but this is not a ladies post, so I won't go into that love).  Peeta never had a bad thing to say about anyone.  He never killed, unless it was because they were attacking Katniss.  He did everything he could to protect her.  And I love that, so much.

I just...I love Peeta.  I love everything about this guy.  And he is one of my favourite literary characters.  Ever.

PS: This was for

lisal825's Literary Lads We Love meme thinger post challenge! :) Thanks for hosting, this was fun :)

Please credit if you use!  Enjoy! 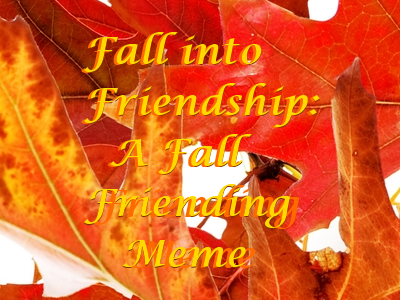 Its fall time, and I figured that that meant, its time for new friends! Have fun and friend away!​

universe_the because its awesome and cool and fun! And mention I sent you!

Theatre.  I'm hoping to use it for a career.  Can't do drama therapy without the use of theatre.

praditmodi
School Ties
What is (or was) your college major? Do you use it for your career?
Reply 370

Ah.  February.  Valentine's is coming up.  Whoo.  Hearts and pink!  I don't normally care about valentine's day, because it has no special meaning to me, because I've never had anyone special in my life, but if anything, I can celebrate my love of my friends this year.

Also, it means a new tournament starting over in Nerd Wars! WOOHOO!  I have to get yarn!  And craft ALL THE THINGS!  I think I've got it planned out to make an Elphaba amigurumi, a Do-Re-Mi coffee cozy, a lacy multicolored scarf, Curly and Laurie amis, a computer ami, and I think a Newsie hat.  WOOT!  It's going to be a busy month, and I need to get yarn and write stuff down, and do some prelim sketches.  SO MUCH TO DO!  SO LITTLE TIME!

And, I also posted something over to Sugarquill, an actual challenge.  For the first time.  Something that wasn't for a Saturday Special.  Woohoo!  I don't think it sucks -too- bad.  And I wrote something for the Writer's Block prompt yesterday.  I AM DOING THINGS FOR HiH!  Now that I think I've figured out how stuff goes.  At least I've been a top sorter every week but one so far.  The only thing I don't have, is graphic skills.  And it is KILLING me that I don't!  I just sit and look at everything that everyone has made, and I'm like "Well, I have no idea how to do that, so that counts me out of that challenge".  And then I feel sad.  But I'm for sure trying to do stuff.  I don't want to let Hufflepuff down!  Cause I love my Puffs! :D <3

I finally have hours this week, for sure.  I am working Friday night.  Floor set, boo.  But at least it's hours!

I went out job hunting yesterday.  Yay.  I went to the mall and applied at Lenscrafters, because they were specifically hiring.  And JcPenny's.  And I checked into Payless, and I'll apply, but who knows.  And Mauriece's wasn't hiring.  I feel a weird vibe whenever I go into the Buckle, so I didn't go in there.  And I don't like how I'm treated when I go into Rue 21 etc, so I didn't go in there.  Ugh.  Why isn't our mall bigger?  And I took an application from Super 1.  I hate job hunting.

Weird.  It's 11 and I'm already feeling like I'm ready to nod off.  I've been getting up around 8 or so everyday.  Mostly because of Chip.  But I've been exercising every day!  I don't think I'm losing weight though.  Trying to change my diet, but it's not going so well.  Oh well, I'm trying.

I think I'm gonna veg out for a few more minutes and then sleep.  I feel myself crashing.

Leave a Message After the Beep
What is your answering machine away message? If you don't have one, you can make it up!
Reply 188
The next time I make a new message, it'll say "SPEAKKKKKKKKKKKKKK!", and that'll be it.

I think the goal of British television is to kill my soul.

Downton Abbey tonight!  I CAN'T EVEN!  Ugh!  My heart.  They just need to stop doing things to characters that I love.

And apparently the internet is waging war against me so I can't watch the last ten minutes of Sherlock.  I swear...I just want to watch the last 10 minutes of "A Scandal in Belgravia".  Which I'm -really- enjoying, and I'm sucked right into.  Man.  What a fantastic show!  I still don't know what happened in the last 10 minutes of the previous episode.  Something about Moriarty, that much I figured out from the beginning of this episode.  But I swear, this show is just so good!

Oh British television...what have you done to me?

If I don't work tomorrow, I've already decided I'm going to McDonald's.  And I'm getting some Chicken Bites, and my free coffee.

I wasn't productive this weekend at all.  I did absolutely nothing today.  Oh wait, I colored a picture in one of my coloring books.  And I did a good work out when a little after I woke up.  And I showered.  That was about as productive as I got.

I'm going to go hash it out with the internet and then finish watching Sherlock, and go to bed.